A Brief Introduction to Photontorch¶

Networks are the core of Photontorch. Custom networks can easily be created by subclassing pt.Network. First, all network subcomponents are defined as attributes of the network, after which the ports of the subcomponents can be linked together with the link method of pt.Network.

A network is called terminated if no open ports are left. The network defined above is not terminated as it has two free indices left: 0 and 1, which are respectively port 0 and port 1 of the directional coupler. A source and a detector (each components with a single port) can for example be added to terminate the network and form a closed circuit:

To start doing simulations, one first has to create an instance of the ciruit to simulate: 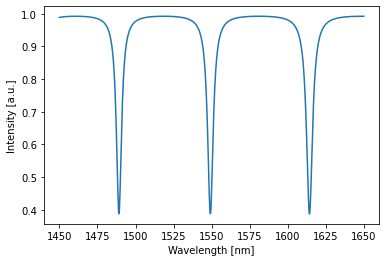 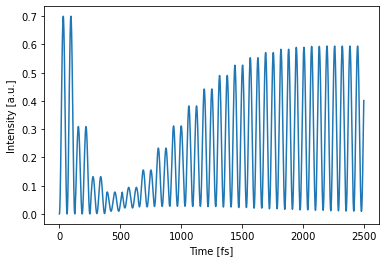 Two independent simulations can also be batched together. Each different source function which will then propagate through the circuit in parallel (but independent of each other). This is a very efficient way of doing multiple simulations at once. It can also be used in the optimization phase for more stable training. 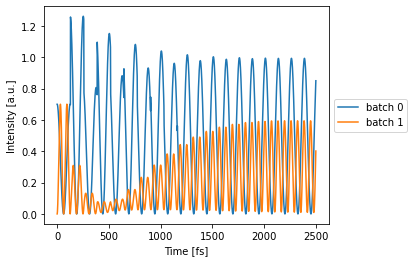 One can also simulate multiple wavelengths at the same time, just by changing the simulation environment a little bit. 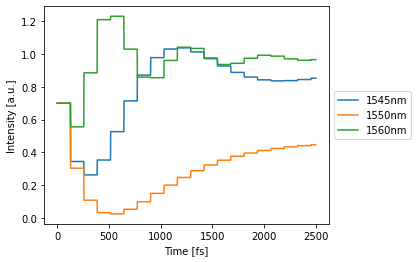 The optimizable parameters of a network can be printed out (just like in PyTorch):

In this case, the circuit has two parameters corresponding to an additional phase factor in the ring and the coupling coefficient of the directional coupler respectively. These two parameters can be optimized to make the network approximate a particular target. For this, native PyTorch optimizers can be used.

Let’s try to shift the resonance in the ring from 1550nm to 1525 nm while simulataneously making the transmission as low as possible by just optimizing these two parameters: 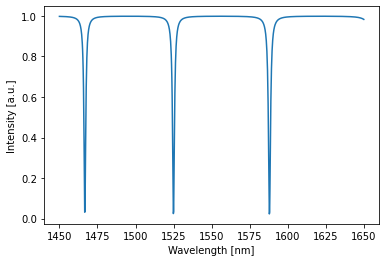 A shift in resonance can be seen while the transmission at resonance is also clearly lower (approaching zero) than before.

Components are the building blocks of Photontorch. Photontorch has a growing number of default components available, it is however reasonably easy to define your own components.

Below an example on how one can define a directional coupler. A component with 4 ports and two parameters: \(\tau\) the transmission and \(\kappa\) the coupling between the arms.

This was reasonably easy. However, the S-matrix still has to be defined. A directional coupler with the following port order

The S-matrix can be defined by defining the method set_S of the DirectionalCoupler component. This method takes one argument: the empty (all-zero) S-matrix S which needs to be filled with elements by that method. The method itself does not return anything.

However, there is a catch. One cannot just put these S-matrix elements into the S-tensor. First of all, the S-matrix needs to be defined for all wavelengths of the simulation. Therefore, the S-matrix has an extra dimension to fill different S-elements for different wavelengths. The wavelength information can be obtained for the simulation environment, which is saved in the component as self.env. Secondly, PyTorch does not support complex tensors, therefore the S tensor to fill with elements is split into a real and imaginary part, such that the total shape of S is:

the set_S method can thus be written as follows: